It was a day that changed America nineteen years ago today. Planes hijacked by terrorists flew into the North and South towers of the World Trade Center. Another plane would crash into the Pentagon. And a fourth plane that was destined for a target in Washington D.C. crash-landed into a field in Pennsylvania. The extreme heat caused by the fires from the impact of the planes would cause the collapse of the two towers.

Firefighters and police raced to the towers trying to rescue those trapped inside the burning buildings. Stories of their heroism in getting people out are extraordinary examples of courage that are both remarkable and breathtaking. Things were so dire at one point that some jumped out of windows to the shock of people watching. And when the buildings collapsed, many of these brave firefighters and police were killed. As the rubble was cleared later, every body of a fallen firefighter and police officer was removed with great care and respect.

More than 3,000 people were killed (including 400 police and firefighters). Over 10,000 were wounded during the attacks on 9/11. Some suffered long term effects due to smoke inhalation and toxic chemicals that were burning at the time. The attacks of 9/11 was the most devastating foreign attack on American soil since the attack on Pearl Harbor on December 7, 1941.

We take time today to remember the fallen of 9/11. They went to work, got on planes, and did countless other things not knowing the evil that was about to take place. Countless lives were changed that day. Families were shattered with the loss of a husband or wife, beloved son or daughter. Friends were never seen again having perished in the towers, the Pentagon, or a passenger on the planes used as weapons.

We cannot forget those who perished on this day. And the heroic sacrifices of first responders- firefighters and police-who tried to save lives cannot be forgotten either.

We ask you in your goodness
to give eternal light and peace
to all who died here—
the heroic first-responders:
our fire fighters, police officers,
emergency service workers, and Port Authority personnel,
along with all the innocent men and women who were victims of this tragedy
simply because their work or service
brought them here on September 11, 2001.

We ask you, in your compassion
to bring healing to those
who, because of their presence here that day,
suffer from injuries and illness.
Heal, too, the pain of still-grieving families
and all who lost loved ones in this tragedy.
Give them strength to continue their lives with courage and hope.

(Part of Pope Benedict XVI prayer from his visit to New York Ground Zero in 2008.) 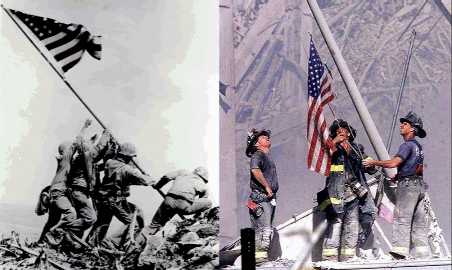 Today is Patriot Day and a Day of Remembrance for those who died as a result of terrorist attack on the World Trade Center in New York on September 11, 2001.