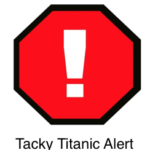 There are no words adequate to describe what I think about this.

A small vessel sunk in Lafayette on Sunday, flanked by pirates and a small whale watching craft. The captain, Carter Aram, 20, and his first mate, Harper Arenson-Pie, 16, never abandoned their ship, despite only a mangled duct tape hull left to cling to by the time they returned to the ladder at the shallow end of the pool. “I sunk with pride,” said a breathless Aram, after competing against two other teams during the maiden cardboard boat regatta at the Great Outdoors Water Park. The lifeguard knew the irony of naming his boat “Titanic 2.”

Footage Shows How Different The Titanic Looks After Over A Century Of Erosion By The Sea
TimesNowNews, 31 July 2022

The eerie footage, posted on TikTok and other platforms, showed the vessel’s rusted icicle shapes that have formed on the hull. Background voices of the expedition members suggest even they were both happy and pleasantly surprise by what they saw. “Wow. Did the lights just go off? It didn’t sound like anything, but it went darker on the right side. Starboard side,” a man is heard saying.

After a short while, the video begins to make more sense and we see what looks like the top portion of the boat accompanied by a central anchor. All of a sudden, the light begins to change and a strange fog appears at the left hand side of the video. One of the voices can be heard saying: “Wow. Did the lights just go off?” to which someone else replies: “It didn’t sound like anything, but it went darker on the right side. Starboard side.”

Meanwhile, the Titanic exhibition will allow visitors to see artefacts from the ship, explore Torquay’s connection to the Titanic and learn about the people that travelled on board. Alongside these latest exhibitions comes brand new stock in the gift shop.

Ramy Awad, an urban explorer living in New York City, set out to central France to document an abandoned 19th-century castle, which he claims was once home to victims of the Titanic disaster. The result? A TikTok video that has already garnered more than 10.2 million views in which Awad gives viewers a tour inside the castle, which features fully furnished rooms with vintage rugs and furniture, wooden panels, built-in bookshelves and bed covers.

Shop for books in our Titanic Book Store