While watching a Titanic documentary, a commentator noted how many lives were cut 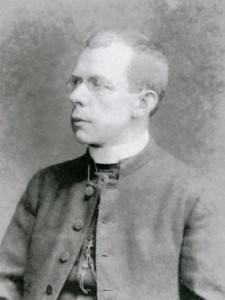 short when it sank. Looking at a list of names one cannot appreciate who they really were. And sometimes it pops up in interesting ways. The Leamington College For Boys (Binswood Hall) in Warwickshire is being transformed into a retirement center so the local newspaper decided to list the notable pupils who graduated from it. And one of them was Rousell Davids Byles, who later became Father Thomas Byles, a Catholic priest,  and was aboard Titanic when it sank.

Byles was the son of a  congregationalist minister who converted to Catholicism while at Oxford and taking the name Thomas. He attended Beda College in Rome and was ordained in 1902. He then was assigned to St Helen’s Parish in Chipping Ongar, Essex in 1905. His brother asked him to officiate his wedding in New York, which led him to be aboard Titanic. While aboard, he said Sunday mass for Second and Third class passengers in their respective lounges. His sermon was on the need of a spiritual lifeboat to protect in times of spiritual shipwreck.

Words that would soon be put to a more real test. When Titanic was sinking, he was in steerage trying to provide comfort, hearing confessions, giving blessings. According to Titanic survivor Agnes McCoy:

“When the Titanic went to the bottom Father Thomas B. Byles stood on the deck with Catholics, Protestants and Jews kneeling around him. Father Byles was saying the rosary and praying for the repose of the souls of those about to perish. To many he administered the last rites of the Church. In the early stage of the disaster he heard a few confessions.”

He also declined to be put aboard a lifeboat allowing others to go in his place. Father Byles is one of those little-known heroes of Titanic. Well regarded back home in his parish of St. Helen’s, his death was met with great sadness. There is a memorial to him at that church. A door in his memory was installed by his brothers, along with a photograph and a stained glass window to commemorate Father Byles.