1. Normally a house sale would not be here except it was once the home of J. Bruce Ismay, 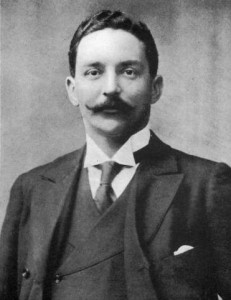 former chairman of the White Star Line and Titanic survivor. No need to rehash that story except to note some news reports erroneously connect him as the person who boarded a lifeboat wearing women’s clothes (nope, that was not Ismay). Costello Lodge, in Casla, Galway Ireland was once his home from 1914-1939. Also some reports indicate he exiled himself there after Titanic’s demise but that is not true. He did other things but led a quieter life outside the public. The property has changed hands over the years and the current owners, Jack and Agnes Toohey, purchased it in 1981. It goes up for auction tomorrow and you can read the details of the property here.

Needless to say this has generated a buzz with many people wanting to see the place where Ismay once lived. A recent auction of things inside the house drew a large crowd though very little was from Ismay. According to Galway News, so many people showed up they had an overflow crowd. The auction lasted from 12 noon until 9pm, the longest that auctioneer had ever conducted an auction. There was some Titanic memorabilia but most came from the current owners. 74 years after his death, Ismay still generates interest.

2. Titanic II Updates-Signs that Titanic II is proceeding forward are indicated with Palmer’s White Star Line inking an agreement with V.Ships Leisure that will be providing ship management services. According to Marine Log: “V.Ships Leisure 200 shore-based and 7,000 crew members provide services to more than 120 cruise ships, ferries and super yachts. These services are in many cases customised to meet the specific needs of clients including the ability to provide integrated deck and engine and hotel management as part of the same service offering.”

Clive Palmer also reports that applications to work on Titanic II are coming in. While some are applying to captain it, Palmer says the best jobs will be the activities director along with the head of food services. If recent meals at his Titanic announcement parties are any indication, you will not be taking Titanic II for its low calorie food.

3. Titanic Commutator, the official publication of Titanic Historical Society, had reviews for two books in its recent edition of current interest.  One is Steven Turner’s The Band That Played On about the famous Titanic musicians. Tim Trower gives this book mostly high marks saying it is well researched and gives good overview of who these musicians–including that of Wallace Hartley–were. Yvonne Carroll’s book, A Hymn for Eternity, is focused on Wallace Hartley although it covers the other musicians as well. Turner is enthusiastic about this book. “During a time that has seen a plethora of ”must have” books, this reprinted (and corrected) slim volume of  A Hymn For Eternity is a book that I would willingly spend part of my rapidly diminishing book budget on…” (Okay, full disclaimer here. This site is partnered with Amazon so I will shamelessly plug these books in this blog. It is your choice to buy them or not.)

4. Gordon Ramsey, the fiery chef of Hell’s Kitchen(HK), recently admitted in a news interview that many cheftestants were chosen not for their cooking skills but entertainment value. Really? I am shocked like Claude Rain’s character was in Casablanca to learn there was gambling going on. Everyone who has watched this show long enough knows they stack it either with actors or those with low kitchen skills to create drama for the show. And it works since it usually gets Ramsey yelling that they are a bunch of donkeys! In Kitchen Nightmares(KN) it is no secret they often have people come in to specifically say how bad the food is (which is not so hard considering that Gordon has tasted the food already). KN is a different show from HK with real restaurants run by the clueless, foolish, and sometimes arrogant owners who have totally messed up their business. And usually the restaurants are in dire need of his help because things are going bad. They just do no realize how bad until he digs around and shows them.

I have been watching, thanks to Netflix streaming, not only the UK version but now the U.S. version as well. I have gotten to the end of season 2 and it really is astonishing what he does find. Statistics are also interesting. 7 out of 9 restaurants in the first season (US) closed. In season 2 all the restaurants are closed. The reasons for closure can vary but fall into distinct groups:

1) Failure to change
Not long after the show aired, the owner/chef decided to go back to the way it was. Customers dropped off again leading to closure. They usually blame it on Gordon for changing the menu.

2) Financial
Debts are so high that even if the restaurant is successful, it cannot be sustained.

3) Government shut down/Eviction by landlord
Restaurants have to pay taxes and if they do not, the state shows up and shutters the place. That has happened to several restaurants Gordon helped. Sometimes the owner goes on and establishes himself elsewhere. Others fold up and go away. Another reason is the landlord raises the rent forcing the restaurant out of business. This happened in the UK version and in the U.S. one as well.

4) Economic downturn/Changing tastes
Many restaurants folded in recent years due to the economic downturn. People stopped spending money in restaurants and financing became tougher to obtain. Another reason is customers tastes change. Many notable old fashioned Italian restaurants in San Francisco have closed in recent years. These old style family places are out of sync in a city that wants more trendy, lighter fare (but there are exceptions to that rule). Their clientele became older and younger people were no longer coming in.

Of course that recent fellow down in Nashville, the one who wears that silly toque and stripped pants, falls into category 1. He knew KN would show the unsanitary conditions, how he cooked fish and meat together (a major faux pas) and generally disdainful of the local people would get bad press for him. So he picked up the phone and called that prize winning newspaper, National Enquirer, to vent before the show aired. He claimed Gordon had wrecked his business by changing the menu, making him wear real pants and take off the toque, and really cook good food again. Yet we know his restaurant is suffering. A news report from 2012 says he was near foreclosure but obviously managed to get financing. He was forced to admit, just before the show aired, that people were going to see things they did not like. Since he has returned to the old menu (and one one wonders that hideous décor), he too may be closing his doors in a year like many others. Blaming it on Gordon is convenient but in the end the restaurant owner has to take responsibility.

*We do not provide links to Republic of Ireland newspapers due to policy of demanding payment for links.