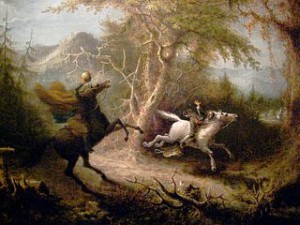 The dominant spirit, however, that haunts this enchanted region, and seems to be commander-in-chief of the powers of the air, is the apparition of a figure on horseback without a head. It is said by some to be the ghost of a Hessian trooper, whose head had been carried away by a cannon-ball, in some nameless battle during the Revolutionary War, and who is ever and anon seen by the country folk, hurrying along in the gloom of night, as if on the wings of the wind.(Washington Irving, The Legend of Sleepy Hollow)

Washington Irving wrote many short stories (some of which deal with ghosts and other supernatural occurrences)but it is this one he is most remembered for. We have the character of Ichabod Crane, an itinerant school teacher who comes to Sleepy Hollow. He is a man with interesting contradictions. Tough when teaching with a strict moral code but outside has few morals. He tries to ingratiate himself to the locals, in particular the women and eventually settles on trying to woo Katrina Van Tassel. He is also a superstitious man, believing in ghosts, demons, and witches. A very nervous fellow because of those beliefs.

His wooing of Katrina earns him the dislike of Abraham Van Brunt, locally known for his many daring feats of strength and known by his nickname Bram Bones. Since Ichabod will not fight him, he resorts to a myriad of pranks but they seem to have no effect. But at the end of the harvest festival party, he approaches Katrina to propose but obviously he was rejected by her. So he leaves the party quite dismayed and in the night gloom all of those ghost stories he has heard make him fearful. And then he encounters the Headless Horseman.

Crane flees but eventually knocked off his horse by the pumpkin thrown by the horseman. Later nothing is found of him except his hat and the pumpkin. His horse is found but nothing else. Was he spirited away by the Headless Horseman or did quickly exit Sleepy Hollow for a better place to live? His belongings were found and destroyed by Hans Van Ripper. So all he had with him was his recent pay, clothes, and nothing else. Stories of him being seen elsewhere are mentioned, that he taught school and studied law enough to become a judge. Bram Bones always seemed to know something about what happened that night.

The story ends with the following:

The old country wives, however, who are the best judges of these matters, maintain to this day that Ichabod was spirited away by supernatural means; and it is a favorite story often told about the neighborhood round the winter evening fire. The bridge became more than ever an object of superstitious awe, and that may be the reason why the road has been altered if later years, so as to approach the church by the border of the millpond. The school-house,being deserted,soon fell into decay, and was reported to be haunted by the ghost of the unfortunate pedagogue;and the plough-boy,loitering homeward of a still summer evening, has often fancied his voice at a distance, chanting a melancholy psalm-tune among the tranquil solitudes of Sleepy Hollow.

So Irving leaves it open as to his final fate. Either might be true but there is no proof. If he was spirited away, it would explain why everything he had in the world was left behind. On the other hand, after being rejected by Katrina and knocked off his horse later by the Horseman, he may have decided to just leave and totally start over elsewhere not caring what others thought. He knew he would be the subject of ridicule over Katrina’s refusal to marry him and likely would find it harder to find another women to marry in that area.

There have been several movie adaptations, some faithful and some not to the story. A recent one on the SyFy had the horseman as part of a devil worshiping cult. The Tim Burton adaptation (Sleepy Hollow, 1999) starring Johnny Depp and Christina Ricci turned Crane into a detective trying to solve a series of murders in Sleepy Hollow. The Headless Horseman (played by Christopher Walken) has been brought back by the wife of Baltus Van Tassel (his second wife and Katrina’s step mother) to exact revenge on those that forced them out of her home when kids and get the Van Tassel properties and wealth. It is actually a good movie. The Disney animated version (1949) with Bing Crosby singing the songs and telling the tale is pretty good as well. Kolchak:The Night Stalker did a homage to the story with its own version about a dead motorcycle gang leader wanting his head back. Fox now has a series based on the characters but a wholly different retelling involving Headless Horseman being one of the Apocalypse Horseman.