The Men Onboard The Titanic Who Gave Up Their Lives To Save Women And Children, Irish Central, 19 April 2021

Men made up 75% of the 2,240 passengers and crew onboard the Titanic’s ill-fated maiden voyage but only made up a tiny fraction of the 705 who survived the disaster. Hundreds of men – both rich and poor – bravely standing aside to give women and children a place on the ship’s lifeboats. The 175 men traveling in first-class had a survival rate of just 32%, while more than 97% of their 144 female counterparts survived the disaster. Second-class male passengers fared even worse with just 14 of 168 male passengers making their way to safety. Women in second-class, on the other hand, had a survival rate of about 74%. That is not to mention the hundreds of third-class male passengers – many of them Irish – who met their deaths on the Titanic.

No One Mistake Caused The Tragic Sinking Of The Titanic, Irish Central, 19 April 2021

A 2019 Channel 5 documentary investigates the series of mistakes that led to the sinking of the Belfast-built Titanic during its maiden voyage in April 1912. No one mistake was to blame for the disaster, according to the Channel 5 documentary “10 Mistakes That Sank the Titanic.” Instead, it was a number of factors that led to the tragedy. The Daily Mail reports on some of the fatal flaws that are featured in the “10 Mistakes That Sank the Titanic” documentary which debuted in 2019, more than 100 years after the disaster

Chester: The Incredible Story Of A Man Who Survived The Sinking Of The Titanic, The Standard, 18 April 2021

And on February 6, 1898, he was aboard the USS St Louis as an able seaman when that ship mounted a rescue of passengers and crew from SS Veendam when she collided with a sunken wreck and foundered. He also saw service in the Spanish-American war of 1898, and in the Boer War, 1899-1902. In 1907 he married Eliza Kate Abbott, and he joined the White Star Line. One day the men were assembled, and he was chosen to proceed to Belfast, where he found he was posted to Titanic as quartermaster.

The most up-to-date examination of the Titanic wreck site using modern forensic technology to understand more clearly what happened. Instead of just looking at a few sections, this expedition sought to map the entire site and learn new details. Many well known Titanic experts were involved along with a lot of other experts as well. This is certainly the most ambitious expedition to date. Enjoy!

Here is something from the past courtesy of British Pathe on Titanic and includes interviews with survivors. 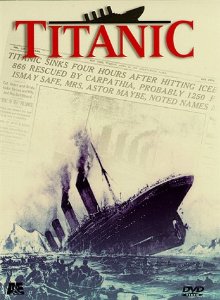 One of the better documentaries out there is A&E’s Titanic(1994). Narrated by David McCallum, it incorporates interviews with various Titanic writers, survivors and others. It was originally broadcast as a two parter and the original dvd release kept that order. Part 1 is Death of a Dream and Part 2 is The Legend Lives On. It is hard to find these days as it seems to be out of print. So either you buy it used or pay a huge price (over $200) for it new. Check out your local library, they might have it available to be checked out or able to retrieve it for you from another library in the system.

Fortunately YouTube has them available for view, but I cannot vouch whether the upload is legal or not. You can view the first part, Death of a Dream by clicking here. Part 2 is also available.

The dvd was repackaged for the Titanic centennial as Titanic: The Complete Story. It is the same, as far as I know.