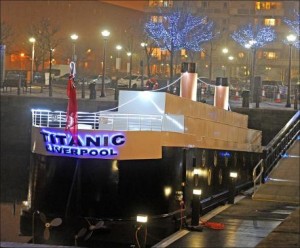 1. Titanic broke all kinds of box office records and dvd sales have generated millions in dvd sales. Of course all that money did not go into private hands. Government got a large share in taxes (in some case income but mostly sales taxes). Most governments do not brag about what taxed items bring in lots of money, China is proudly telling everyone that customs duties on Titanic dvds generated $33.7 million dollars. The surge, according to Xinhua, is due to increased numbers of foreign movies being imported. Of course imports are very controlled in the People’s Republic. There is only one authorized importer of foreign movies ( China Film Group Corp) and Beijing Customs is the only authorized channel for the foreign movie imports. Which explains why they are so adamant about controlling the Internet. Hard to tax a movie from YouTube (but you can shut off access to it).

2. Okay you have heard about Titanic cruises and dinners but what about sleeping in a floating hostel that is designed to look like a sinking ship? You can at at Liverpool’s Salthouse Dock,where the floating hostel has an uplifted stern and slanting porthole windows to give such an effect. Needless to say, it has drawn sharp criticism and its owner, Alfie Bubbles (yes, Bubbles) has refused comment on his soon-to-open Titanic Sinking Boutique Hotel. We can only hope it financially sinks.