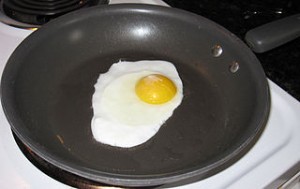 It is Thanksgiving week but not on Masterchef Junior season 2. Nope, no turkey and all the trimmings here. I am surprised they did not have one. It would be a great challenge to have these kids come up with an upscale turkey meal for Thanksgiving. Instead we get a fried egg challenge and have them cook their signature dish. This was an underwhelming episode and perhaps one of the reasons Joe “the stare” Bastianich has decided to move on from the Masterchef franchise in 2015 (except for filmed episodes of the next season already in the can). Really this was one episode you could miss and come back later to watch. Or not at all.

So the kids all line up to learn they will cook perfectly made sunny side up eggs. They have done this on Masterchef but not on the junior side of the show. Oh and they have ten minutes to cook as many as they can. Perfectly. Off they go to get the pans nice and hot, and cracking those eggs into the pans. If these kids saw what happened on that Masterchef episode, they would have doubled their efforts to do it right. In that episode three former contenders were cooking eggs for the chance to return to the show. It was brutal as the judges tossed any egg and its plate into the trash that did not measure up. Nor did they mention the number of eggs cooked perfectly would have a very important impact on the next challenge.

Now I suppose the lesson here is consistency. In restaurants, each meal has to be perfection on the plate each and every time. And mastering how to perfectly cook sunny side up eggs is one way to do this. The adults did not fare well in the challenge and most of the kids end up overcooking them or worse. Abby got only two eggs correct while the others got four to ten eggs right. Sean got ten for the win.There was no trip to the pantry tonight and no selection of foods to be done by the winner. Instead the number of eggs successfully cooked meant the number of ingredients in your signature dish. Great for most but it left Abby with just 2 ingredients. Oh boy. Gordon tried to console her but it came out kind of flat to me. In fact he was smiling way too much about it as if he was happy it occurred.

We learn the various restaurant dreams the kids have. Abby wants to have a combined veterinary and restaurant. Bring your animal in for care and then sit down for a meal! It will be called Horses and Courses. Logan wants to have an underwater bistro! Moving on….Graham decides to reveal he started out at 17 as a dishwasher in a restaurant. And it turns out his mentor to get into the business back then was none other than Gordon Ramsay. Moving on again….Abby is limited to two ingredients and decides to do salmon & asparagus done five ways. Samuel is going to do a blood orange glazed duck breast with zucchini and pasta. Just be careful to select the right fruit. His restaurant will be called Le Samuel with a French-Asian theme. He even has drawn what the restaurant will look like and describes it. Ah filler can be interesting in an episode that is well, boring. At least he has thought out his restaurant but he needs to work on recognizing his fruits and vegetables first like cucumber and zucchini. Now that is a trick question since both cucumber and zucchini are fruits but treated as culinary vegetables. It is easy at first glance to make the mistake but they are not that hard to distinguish upon close examination.

The dishes went from really good (Abby, Adaiah and Samuel) to not that good (Logan, Levi, Sean, Oona and Sean). On the bottom were Josh, Levi, Oona and Sean. Both Oona and Sean were saved sending Josh and Levi home. Levi said the best part was meeting Ramsay. Josh says Samuel or Sean will be the winner.

As the credits rolled by, I really thought this episode just lacked the punch of the previous episodes. Something was very off here. Libby Hill over at Grub Street says that the elimination challenge was flat.

There was a certain winning quality about watching the kids talk about their imagined restaurants and showing off their elaborately planned layouts, some meticulously colored. And sure it was darling to see a little girl extoll the virtues of her future restaurant — called “Horses and Courses” — complete with ride-up pony parking, but the rhythms of the episode were a complete disaster. The entire thing was so ill-timed that dish-tasting and judging began halfway through the episode, since it means the show had to devote an entire 20 minutes to the criticism of hardworking children.

Her criticism is that the judges do the good cop/bad cop routine too much. Meaning while they praise they good efforts, they continually ding you for the mistakes. She cites Logan as an example of this. Joe said his meat was good but that his rice was overcooked and lacked salt. And that was that. Gordon praises the meat and knocks the rice as well and then spends more time explaining his critique:“I just expected you to be a little more elaborate. And I have to be honest with you because we are looking for the best youngster. And you’re normally up there. So I am just slightly underwhelmed.” He goes on later to say he took seven ingredients and made them look like three. Others clearly get that Gordon is unhappy. Samuel even whistled. Logan looked rattled from the experience.

Gordon thinks Logan is so much better and was clearly disappointed in what was presented. So he gave him a more stinging rebuke in order to light a fire under the kid. It did succeed in knocking Logan down; he looked pretty down afterwards. Gordon never raised his voice, never cursed or said anything obscene. Perhaps that is what disturbs some who watch it. The message is clear enough: you can do better so do better! It is drill instructor light. On the other hand, the continued harping seems pointless. Logan got the message so why did Gordon keep beating the dead horse? Because I think he was frustrated with what he saw with his dish and probably other ones as well. He had enough and decided to vent. It was at the expense of a child who may have felt brow-beaten by the time it was over.

At any rate I felt this whole episode was pointless. Other than learning the kids restaurant desires, it is neither here nor there in the entirety of the show. This is that episode, and every show has one, where they know it is something to fill the schedule and nothing more. Pun intended, this was a turkey of an episode that ought to have been scuttled. I would preferred to have seen the famous WKRP episode with now classic turkey drop in it.