If you have not visited the Titanic exhibit in Grand Rapids, you now have extra time. Due to popular demand, the exhibit has now been extended to 8 Sept 2013.  Titanic:The Artifact Exhibition is open the following hours at the Grand Rapids Public Museum:

Important note: GR Museum does not sell Titanic tickets online. The museum suggests you buy them ahead of time as only a limited number of tickets are for sale at the museum each day. Titanic Exhibit tickets are timed so you need to choose a time slot to enter the exhibit on that day. Further information is at grmuseum.org.

Mlive.com is reporting that the opening of Titanic exhibition at Grand Rapids Public Museum on 9 Feb drew in nearly 3,500 visitors that weekend. Both days were sold out with many people trying to get in at the last minute. Kate Moore, marketing director for the museum, suggests purchasing tickets in advance since the exhibition can only accommodate 200 visitors at a time.

For exhibition hours, admission prices, and how to get there, go to grmuseum.org.

Titanic: The Artifact Exhibition has opened in Grand Rapids, Michigan at the Grand Rapids Public Museum. The traveling exhibition will remain in Grand Rapids until July. The museum expects it will draw visitors from across the state, Indiana, and possibly Illinois. Some are even dressing up by showing up in period clothes. Of course the museum has high hopes for the exhibit. It usually draws high numbers of people. For more information as to admission fees, dates and times, go to grmuseum.org.

Until recently, I never heard of the Lozier car. I came across the name in a story from 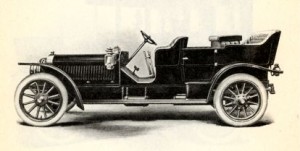 WZZM 13 about Titanic survivor Dickson Bishop. According to the story, upon returning to American soil, he called up his chauffeur and ordered him to come get him with the Lozier. The Lozier was one America’s early luxury cars that sold between $4,600- $7,750 at a time when the average price was around $750. The company, founded by Henry Abraham Lozier, lasted from 1900-1915. Since its cars were sold to a select few, it only produced a few thousand cars. The high watermark was in 1912 when it produced 600. Competition and defections of important employees to other companies apparently doomed the company.

The cars are not forgotten though. A car identical to the one driven by Dickson Bishop is on display at the Gilmore Car Museum in Hickory Corners, Michigan.

Reminder: Titanic: The Artifact Exhibition is set to open in Grand Rapids this Saturday (9 Feb) at the  Grand Rapids Public Museum. For hours and admission prices, go to grmuseum.org. The exhibition lasts until 7 July 2013.

The Grand Rapids Public Museum in Michigan is looking for Titanic enthusiasts to work at the upcoming Titanic exhibition in February. Both paid and volunteer positions will be available. For details on the jobs available, click here.

The Great Lakes has seen scores of shipwrecks lost to nature, poor seamanship, bad designs, and just plain bad luck. A new exhibit at the Grand Rapids Public Museum shows how 13 ships all met their end and why. The exhibit opens 10 Nov and includes information about the SS Milwaukee, Carl D. Bradley and the Edmund Fitzgerald.

Titanic: The Artifact Exhibition will open in February 2013.

The exhibit is free with general admission. For information on hours, tickets and other information, go to grmuseum.org.