In Austria Silent Night is not heard until Christmas Eve, usually around 9 p.m. Then it is played on the radio once an hour and of course during church services.

There are many renditions of this simple tune from simple solo to full ensemble. Mannheim Steamroller made a version for their first Christmas album in 1984. And it still enthralls many who hear it for the first or perhaps the tenth time.

As we count down the days till Christmas Day next Friday, here are some popular tunes of the holiday for you. Enjoy!

And the ending of that all time favorite It’s A Wonderful Life.

As we open up this Christmas season, here is a classic for your Friday afternoon. Here is Judy Garland singing “Have Yourself A Merry Little Christmas.”  Enjoy and have a nice Friday.

This song has become popular again thanks to YouTube. The Snoopy scenes are from It’s The Great Pumpkin, Charlie Brown. Enjoy.

Happy Friday everyone and to set this weekend off here is a catchy rendition of Jingle Bells by Ottmar Liebert using the guitar. 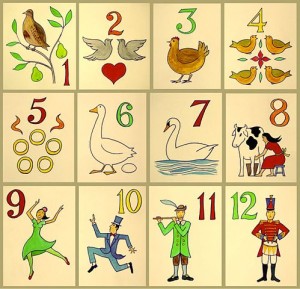 The Twelve Days of Christmas is a rare song in the pantheon of Christmas music. Most songs follow a certain pattern of a beginning, middle, and end but this song is cumulative meaning each verse builds on the previous one until the end is reached and then counts back down to the beginning to end the tune. It is unclear what the exact origins of the song are or what it was originally meant to mean. Some argue that it was a children’s memory game, which considering how the lyrics are laid out does make sense. It is also suggested French in origin.

The song was likely around for quite a while before it was printed in 1780 in a British children’s book called Mirth Without Mischief. It was presented as a memory game for children to play but had no music accompaniment. The song grew in popularity and became part of the English Christmas tradition for many kids. There are some variations that use ten rather than twelve but the most widely accepted version of the song uses twelve days. The twelve days are generally from Christmas to Epiphany (Twelfth Day) depending upon when you count it. Most count from Christmas Day but some the day after. Gifts varied in the different versions but the one most people are now familiar with was published in 1909 with composer Frederic Austin fitting the words to the melody heard today.

While most people consider the song and the gifts non-religious, there are some who argue the song was used to train children in Catholicism when it was banned in England (1588-1829). There is little evidence to support this claim and it is noted that none of the lyrics indicate anything different between Catholic and Protestant. Most Catholic religious dismiss the notion of it being a tool for Catholic catechism as well.

The song is also used as an economic barometer of sorts. Often it used, mostly for fun, to price the gifts to see how they cost in the past and now. Some are a bit tricky to calculate these days but can approximate though pricing ten lords a leaping is a head scratcher for most but the cost of 10 male ballet dancers will fit the bill.

There are many popular renditions out there but here is a recent one by country singer Sara Evans and her daughters. Enjoy!

If you have watched Charlie Brown Christmas you have heard this tune. A nice melody performed by the Vince Guaraldi Trio.

One sign of the Christmas season are the musicians who play the wonderful music. And one such way is the brass band. It was a common thing not too long ago to see a brass band–usually the Salvation Army–playing wonderful Christmas melodies on a street corner, city park, or in a concert. There is something about a brass band and Christmas music that just works. There is no way to really explain why and you could possibly go mad trying to figure it out. The old Philadelphia Brass Ensemble is still my favorite go to Christmas album. Sadly not available on Amazon right now but available on iTunes (Philadelphia Brass Ensemble:A Festival of Carols,1967) for purchase.

The First Noel is an English Christmas Carol possibly from the 18th century or earlier. Noel comes from the French word meaning Christmas or Christmas season. It can also be a first name as well (like Noel Coward). As we know the carol today, it was first published in Carols Ancient and Modernin 1823. Since then it has been edited with extra lyrics over the years. It usually is performed with a four-part arrangement though variations exist. The most common version sung is the New English Hymnal based on John Stainer’s Carols, New and Old(1871).

O Holy Night was composed by Adolphe Adam in 1847 to the French poem Minuit, chretiens (Midnight, Christians). In 1855 John Sullivan Dwight, a Unitarian minister, adapted it for English audiences using the French text. It has become a popular Christmas carol sung by numerous artists over the years. Mariah Carey’s rendition is particularly stirring. Enjoy.