Back in the day when President Harry Truman wanted to get away from it all or hold important meetings. he went aboard the yacht USS Williamsburg. Originally built as a private yacht in the 1930’s, it was well decorated for such uses. Then came World War II and she was converted into a gunboat. When the war ended, she was selected to replace the USS Potomac, which had served as a presidential yacht under President Roosevelt. During Truman’s presidency, it became known as the seagoing White House hosting many dignitaries such as Winston Churchill. She also was President Eisenhower’s yacht as well for a time but he decommissioned her in 1953. She was struck from the Navy list in 1962.

The Williamsburg ended up at Woods Hole Oceanographic Institute in 1962 where she was overhauled for marine research. All the presidential staterooms and yacht like trappings were removed. She was renamed Anton Bruun, a noted Danish marine biologist. She did several scientific cruises but suffered severe damage in 1968 due to a dry dock mishap. Deemed too expensive to restore, in 1971 she was put up for sale. It was bought up for commercial use as floating restaurant in New Jersey. In 1993 it was sent to Genoa, Italy for conversion into a luxury cruise ship. That never happened and was going to be scrapped. Some last minute intervention with the Italian government prevented that but the ship remains at La Spezia, Italy slowing rusting away. A preservation society has been formed (USS Williamsburg Preservation Society) and it is for sale by  Lloyd’s Yacht & Ship Brokers.

When you see pictures of what it was like back in the day, it is sad to see where it finally ended up. It would have been better scuttled at sea rather than ending up as it is now. 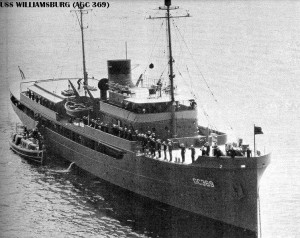 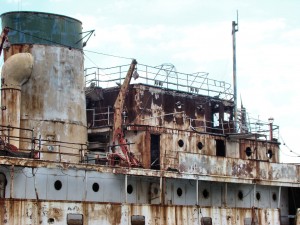