Cheryl DelVecchio, the Children’s Librarian at Fairfield Woods Branch Library, came up with the idea of workshops focused on Titanic. One of the recent ones involved the kids building mini-replicas of Titanic using construction paper, milk cartons and glue. According to Ct Post, the models “included smokestacks and could be adorned with accessories like waves and sea creature stickers. Children and adult companions collaborated on the work, trimming, taping and decorating the small ships.” From the pictures it looked like the kids had a grand time working on the project.

Sometimes it is the simple things that tell the story much better than all the expensive glitter and pomp. 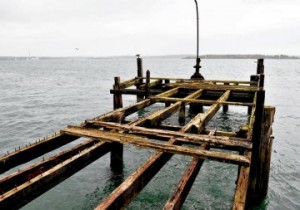 Belfast is planning a new rapid transit system that will not only handle tourists to the Titanic Quarter but the needs of the city as well.

One item on the table is bringing back the bendy-bus. Called an articulated bus in the U.S., it is essentially two buses put together with a flexible middle. This allows it to make turns and get around road hazards more easily. They are tricky to run and London phased them out some years ago due to accidents and general dislike of them. Other cities did it as well in the U.K. and Northern Ireland. They were replaced with conventional and double-decker buses.

With Belfast wanting to have high speed buses arriving every five minutes, the bendy-buses are getting a second look. I have taken such buses in San Francisco. They are used on high density lines (the 30-Stockton) where you need such buses to handle the large numbers of people. On that route, the buses are electric so no worry about diesel fumes wafting around. And that line has to weave its way through Chinatown (where the majority of its passengers are heading for or leaving) where traffic is usually heavy during the day.

Buses, whether they are conventional or electric, are a more flexible alternative than light rail. Light rail is very expensive and limits their use to where the rails are laid. When the tourists arrive in 2012, they will need a system that is easy and convenient to use. Perhaps the bendy-bus will be part of it.

Source:
Belfast Telegraph, The Possible Reintroduction Of New ‘Bendy-Buses’ Could Be Part Of The Plans For A £150M Rapid Transit System For Belfast, 13 October 2011

Stop the presses! An official communique, actually a press release, announces that the International Maritime Organization (IMO) has endorsed a proposal by its Secretary-General to dedicate 2012 World Maritime Day to Titanic victims. The reason, the news report says, is “that the time had come for the organisation to return to its “roots” of identifying with safety of life at sea.” Which makes one wonder how far they have strayed from their supposed mission of safety at sea. Until this press release, I never heard of IMO and I doubt many have.

So what is going on here? Is it merely a way to acknowledge a terrible loss at sea in 1912 and the lessons learned from it? IMO plans to “examine whether the lessons drawn from among the most costly accidents of the last 100 years had been learnt to the full.” The next line says it all:

“The organisation will also identify the most contributory factors in the quest for ever-enhanced safety in shipping.”

Written like a true bureaucrat! You might conclude they will put out brochures and other informational media as to the many safety innovations over the years. More lifeboats, 24 hour radio, life vests, satellite transponders. All of that true. Perhaps they just want to hop on board the Titanic bandwagon in 2012 like everybody else is doing. Except they were not around in 1912. Nor does the IMO, as far as I know, have any participation in the International Ice Patrol. Since the major maritime nations already have mechanisms in place (regulations and oversight agencies) that deal with shipping, the IMO probably does not have much to do. So it probably comes up with nifty reports on dealing with many maritime problems and perhaps useful in meditating the occasional spat between shippers and maritime authorities. I suspect though they have been working on other areas outside of their framework

In case your wondering what the 2011 IMO day was, the theme was “Piracy: Orchestrating the Response.” Well the old way still works. You track down the pirates, damage or sink their crafts, hinder their ability to operate, and execute the worst of the lot and imprison the rest.

A fascinating discussion took place on my list recently concerning whether or not many were still interested in Titanic. Postings have become fewer in recent years but not due to lack of interest but rather disinterest in all the babble about Titanic. Some point to Cameron’s Titanic as when it shifted from a serious study to something akin to entertainment. Then there were the numerous books, documentaries, exhibitions, and even tacky Titanic items put on sale. For many old timers, it simply became too much. They stuck with visiting with other Titanic enthusiasts, going to special events, and doing their own research.

This does not mean interest in Titanic has ended, just shifted into another mode. Perhaps this is the normal way of things. Most of us drawn to Titanic can remember the exact moment when it became important. Perhaps it was watching A Night To Remember, hearing someone talk about it, seeing a documentary, or reading a book. It led us to explore the subject further. In the process we learned lots of interesting things that kept us interested. The Titanic story comes close to the Greek meaning of tragedy. The word is much abused today but simply means that the sad events that occur would have been prevented had things been done differently by the central character. And Titanic, as Walter Lord notes, has so many What-If’s that haunt you.

The Titanic community was split by salvage. Ballard and many others did not believe salvage ought to be done arguing the wreck was a grave. Some survivors, like Eva Hart, agreed with it. The other side to the argument is that Titanic had a story to tell from all the things left on the ocean floor. Heated exchanges occurred and Internet flame wars resulted. Unfounded accusations were made and friendships ruined. Today the issue is less vitriolic but no less passionate. Today many can see the traveling Titanic exhibitions that show to people what life was like on the ship. One cannot help but be moved by seeing artifacts from the ship.

Recently San Francisco had its own anniversary of a catastrophe: the great earthquake of 1906 on April 18. Like Titanic it has it own legion of people who study it. Nearly all those who survived are gone now, the few that remain are over 100 years old. And like Titanic, it had its heroes and villains. The earthquake was far more destructive than was led to believe, and those most hardest hit were those were people who lived in cheap housing in an area (called South of Market) built on landfill. They were like Titanic steerage  and paid a terrible price on that day.

Fatigue? Well not really. Just a more mature development of a continuing exploration of Titanic. Sure we like some new books or interesting documentaries, but we have read a lot. Mostly we realize that Titanic has a story to tell. A sad and fascinating one. The latest Titanic thing, whatever that might be, is not going to wow us that much. The upcoming anniversary in 2012 is both a celebration of life and a remembrance of all those who perished on that very cold night in 1912. Anything else is just a distraction.