“While Titanic was the largest man-made object afloat in 1912, it could easily fit inside today’s mega cruise ships.” Titanic measured 269m in length while the world’s largest cruise ship, Royal Caribbean’s Wonder of the Seas, measures a whopping 362m. London’s Shard is 310m so is easily dwarfed by Wonder of the Seas although Titanic was smaller. Titanic had three classes onboard, first, second and third. Sheryl told Express.co.uk what passengers in each class could expect.

Links Between Halifax And The Titanic Remain Strong (Canada.com, 4 Mar 2022)

In the dark days after the tragedy, the Nova Scotia capital became chief mourner, coroner and undertaker. “It gathered, identified and buried the bodies, and it did so with great diligence and respect,” British newspaper The Daily Telegraph said in 2012 during the 100-year memorial events. “The poignant tales of love and loss uncovered in the process ensure that the sinking is remembered, not just as a historic event, but as a human tragedy on a colossal scale.”

A documentary telling the story of six Chinese Titanic survivors will play at the Beloit International Film Festival, featuring the story of a local restaurant owner’s family. “The Six,” which follows six Chinese natives rescued from the freezing North Atlantic after the sinking of the Titanic, will have one of its first US showings in Beloit. According to BIFF executive director Greg Gerard, finding the film has been a fun process among the local community. “It turns out that there’s a person who was on the Titanic that’s buried in a cemetery in Beloit. I mean, these things we we never knew about before are coming to light. So it’s kind of it’s been very fun,” Gerard said

In the immediate aftermath, a swirl of rumour, fake news, and conspiracy theories sprang up; was the ship’s state of the art design riddled with mistakes, were engineers rushed to complete it by its wealthy owner, did the needs of insurers come before saving souls, and was it an iceberg that caused the disaster? Northern Irish playwright Ron Hutchinson, whose grandfather helped build the doomed ship, spotlights these conspiracies in Ghosts of The Titanic, which blends fact with fiction as a bereaved woman tries to discover the truth about her fiancee’s death. 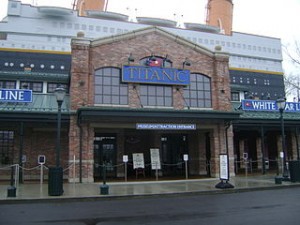 A historic adventure at the Titanic Museum (WATE.com, 1 Mar 2022)

At the Titanic Museum of Pigeon Forge the decorations and crew celebrate March with the Irish Fairy Cottages. On the ill-fated voyage of the Titanic there were 187 Irish on-board the ship and the Titanic Museum of Pigeon Forge pays homage to these individuals with their March decor. When you visit the museum, keep an eye out because there are some new additions that are truly remarkable. There are five Irish Fairy Cottages throughout the tour and each has it’s own personality and theme, not to mention that each has been hand-crafted and therefore one-of-a-kind.

When a new cemetery is established on dry land, the grounds are thoughtfully curated. But when a ship is lost without warning, there’s no time for such plans. As the National Oceanic and Atmospheric Administration (NOAA) website observes, accidental shipwrecks “show the past as it really was” by “preserving a single moment in time.” Sunken vessels captivate us. They inspire grief, wonder, romance—and horror. Here are stories of famous ships that went under, leaving a changed world in their wakes.

An initiative to send two Indigenous artists to the Titanic site is aiming to help commemorate the site and raise interest among Indigenous people in maritime careers.  It’s very important that the expedition captures the last days of the Titanic as it slowly dissipates,” said Shayne McDonald, director of Miawpukek Horizon Maritime Services, a joint business venture between Miawpukek First Nation and Horizon Maritime Services that offers marine services like tugboats and subsea cable repair and maintenance. It’s a unique story in history, and as we keep it alive, we keep alive the stories of the individuals that died on the voyage.”

The first time I met Marshall Drew, he pulled out a well-worn book. “This,” he said with a chuckle, “is an announcement of my death.” Of course, the published account of his demise was wrong. In fact, Marshall lived almost three quarters of a century longer. But many of the passengers he was traveling with on that long-ago trip were not so fortunate. Marshall was one of the survivors of the sinking of the Titanic. I had interviewed him years ago in Massachusetts. Now I was seeing his name listed on the passenger memorial for the Titanic Museum in Pigeon Forge, Tennessee.

Titanic Luxury: Museums Worcestershire’s Snapshot Of Life Onboard Before The Tragic End
Worcester News, 22 May 2021

The exhibition charts the history and legacy of the White Star Line and the Titanic through an astonishing array of rare items original to the ship, props from the 1997 James Cameron film, and real stories of people from Worcestershire who were aboard the ship on what should have been her triumphant maiden voyage to New York.

Titanic Treasures That Sold For a Fortune (Slideshow)
Lovemoney.com, 21 May 2021

But over the years, treasures telling the story of those passengers, both those who survived and those who sadly lost their lives, have been recovered. Click or scroll through to discover some of the most spectacular, and valuable, pieces from the tragic ship.