I recall some years ago when Wallace Hartley’s violin was found and the incredible amount of attention it generated. It truly was a great find. The actual violin that Titanic  band leader Wallace Hartley played on the ship had been discovered. It was in a bag on his body and was later stored and nearly forgotten.

Of course there was a lot of skepticism, as there should be. There have been a lot of scams of fake Titanic memorabilia being passed off as genuine in the past. The violin was rigorously examined and tested to make sure it was authentic. It was and ultimately auctioned off (the winning bidder was anonymous). Here is an interesting story looking into the violin and its importance not only to him but his fiancee that sadly was never to be his wife.

Hartley’s body was pulled from the water 10 days after the Titanic sank. Strapped to the bandleader, the rescuers found a leather valise with the initials W.H.H. Inside was his violin case and treasured instrument, as well as some musical scores. For decades, the violin was lost to public knowledge. However, upon its resurfacing in 2006, the rest of the sad story of Hartley and his fiancée has been illuminated. Upon the violin’s emergence from a musician’s attic in 2006, the instrument was the subject of scrutiny by auction house Henry Aldridge & Son and Christian Tennyson-Ekeberg, author of Nearer, Our God, to Thee: The Biography of the Titanic Bandmaster. It was discovered that in July 1912, a grieved Robinson included a telegram receipt in her diary. It read, “I would be most grateful if you could convey my heartfelt thanks to all who have made possible the return of my late fiancé’s violin.” Somehow, in the process of identifying and repatriating the dead, the possessions of the late bandmaster were returned to England.

Marion Wright’s five-page account was written to her dad the day after the disaster in April 1912. She watched from a lifeboat as the Titanic sank after hitting an iceberg. Marion, who was 26 at the time, wrote: “It was terrible… I don’t think I shall ever forget it… “We saw the crowds of people when she broke in two which she did a few minutes before she sank going down with a huge explosion over the cries of the people left on board.” She was in her cabin when the “unsinkable” liner struck the iceberg in the north Atlantic.

A Titanic Mystery Is The Subject Of New Theatrical Dinner Experience At Goodwin Hotel In Hartford,Hartford Courant, 1 April 2021

The final first-class meal ever served on the Titanic is the inspiration for a theatrical dining experience running from April 16 to May 9 at The Goodwin hotel in Hartford. Tyler Anderson, executive chef-owner at the acclaimed Millwright’s in Simsbury, or members of his Millwright’s chef team, will cook for up to 126 people each Friday, Saturday and Sunday night in the second production of “Room Service at the Goodwin,” Anderson has announced. Diners will eat in parties of up to six people, each party in a separate room of the hotel, 21 rooms total. The Titanic meal will be accompanied by a mystery story about the 21 passengers on the Titanic who were bound for Connecticut.

Was Space Weather The Cause Of The Titanic Disaster? Irish Times, 1 April 2021

At the time of the disaster, the skies were clear, the sea was calm and there was no moon. Several sightings of the aurora borealis, a visible manifestation of geomagnetic disturbance, were reported. The sunspot cycle was near minimum in 1912, and reports from the British Antarctic Expedition on the fateful night were compatible with a coronal hole event on the sun.

Measurements at several geophysical observatories confirmed the occurrence of a strong magnetic storm. This could have affected compass readings on both Titanic and Carpathia. Zinkova argues that this caused similar errors on both ships, accounting for the miraculous interception of the lifeboats by the rescue vessel. The light from the aurora may also have aided the rescue operation.

Plans are being drawn up to create a new cultural landmark rivalling the Titanic in Belfast and V&A in Dundee in Glasgow. The Ship Yard Trust are looking to create a tourist attraction marking the industrial achievements of the River Clyde and the contribution of the men and women of Glasgow who worked there. The proposal has been described as ‘ambitious’, with the final outcome hoped to be the same quality of other successful attractions including the V&A to put the Clyde on the ‘tourist map’ and provide employment in local communities.

A letter written on the Titanic by a hero pastor who died in the ship’s sinking is up for auction in the U.K. The letter was written by John Harper, the pastor of Walworth Road Baptist Church in London, a widower who was traveling with his sister and 6-year-old daughter to preach at the Moody Church in Chicago.

The letter will be auctioned off by Henry Aldridge & Sons on 14 Nov.

Ship Branded The ‘Titanic Of The Great Lakes’ Discovered 110 Years After It Sank (Mirror, 2 Nov 2020)

A ship branded the “Titanic of the Great Lakes” has been found in its watery resting place – 110 years after it mysteriously sank. The Pere Marquette 18 spent the summer giving pleasure cruises in Chicago and was called the “world’s largest pleasure boat” and the “safest ship afloat”. But the vessel sunk with the loss of dozens of lives en-route from Michigan to Wisconsin as it returned to its regular route in September 1910. There were multiple witnesses to the sinking – including another ship, the Pere Marquette 17, which came to the rescue – but the cause of the calamity remains a mystery.

The expeditions, which will see nine guests set off on an eight-day trip from Canada’s Newfoundland, won’t be cheap. Each of the “mission specialists” (used to describe the guests) will be expected to pay $125,000 (£96,368) for the trip which includes a six to eight-hour dive in the submarine to see the wreckage. Only three guests will join the driver in the submarine at any one time. Rush, who is planning to host the trips from May to September annually, says that 36 people have already booked in for the first six expeditions.

1. Rare Titanic Poster Surfaces
The Irish Mirror reports that a rare Titanic poster has been found and soon will be up for auction. Red,white and blue posters were put up around lower Manhattan in New York during the spring of 1912. After the sinking,the posters were taken down by White Star. The posters advertised Titanic as “Queen of the Ocean.” They included two black and white photos of the interior with Olympic as the stand in. And they were for the return journey set for Saturday, April 20, 1912. The Mirror reports only a handful survived and the one up from auction cam from a private source. Henry Aldridge & Son is handling the auction. The presale estimate is £60,000-£100,000 ($78,580-$130,968).
Source: Rare poster on return voyage of the Titanic surfaces over 100 years after sinking (Irish Mirror,17 Oct 2018, )
(Due to policy of Irish newspapers to impose fee on links to news articles, we are not providing one here.)

2. Titanic II in 2022?
Well say this about Clive Palmer, he is not given up on the idea of creating a seaworthy replica of the famous ship. It was a total bust last time since he could not get Chinese investors aboard. Now he is claiming it will launch in 2022 after being built in China, sail to Dubai following a shakedown cruise from China to Signapore, and then to Southampton. The project is expected to cost $500 million. Whether this is just a publicity stunt remains to be seen.
Source: New Titanic to set sail from Dubai in 2022, says Clive Palmer (arabianbusiness.com,16 Oct 2018)
https://www.arabianbusiness.com/travel/406296-new-titanic-to-set-sail-from-dubai-in-2022-says-clive-palmer

The UK Telegraph is reporting that a letter written aboard Titanic fetched £126,000 ($166,254) at auction. The letter was written by first class passenger Alexander Oskar Holverson and was recovered from his body. The name of the buyer was not revealed.

“It is oversized, hand written on Titanic letterhead by a victim just a day before the ship hit the iceberg, mentions the food, the music and the elite on board, contains an ominous message with regards to the fate of the ship, was carried by its author into the Atlantic and, thence, on to the body recovery ship and shows evidence of its submersion in salt water.”

Up till now, there were no photos of burials at sea done aboard Mackay Bennett when it recovered Titanic victims. Victims who could be identified were brought back for burial by relatives. Those that could not be identified or third class who could not afford a funeral were buried at sea. Now Henry Aldridge and Son, who seem to have a franchise on Titanic memorabilia and rare antiques, have a photo up for auction that shows a mass funeral taking place. The photo was taken by Westy Legate, fourth officer of the ship.

The photo shows body bags on the ship’s deck, two men appearing to tip a stretcher that carries a body into the sea, the ship’s priest Reverend Hind conducting a service, and members of the crew standing nearby.

Apparently another crew member’s family got possession of the photo and are now putting it up for auction. The pre-sale estimate is £5,000 ($8,000). Considering how rare this photo is, that figure seems low for a one-of-a-kind item. Then again it may sell for three times that amount at auction. Henry Aldridge is quoted in the Daily Mail saying:

“This picture blows away the myth that the burials were an orderly and dignified process. You can clearly see the bodies in brown sacks piled up on the deck, with some piled two or three high.”

What myth is he referring to here? Most of the accounts I have read (and admittedly I have not read them all) generally relay it was a mass burial. Now perhaps to console grieving relatives not all details were included (like stacking bodies on the decks) but that is hardly a myth. It is hardly surprising that they would need to stack bodies on the deck, considering the numbers involved. Since it was a burial at sea, this would be a necessity.

The sextant owned by Carpathia captain Arthur Rostron, who came to Titanic’s aid in 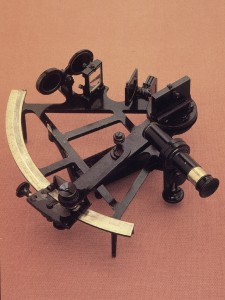 *Premiere Exhibitions has announced that most of the jewelry recovered from Titanic will go on a three city tour beginning this Friday in Atlanta. The Jewels of Titanic exhibit will be in the following cities and part of Titanic:The Artifact Exhibition:

*Henry Aldridge, the well known Titanic auctioneer, is putting up a rare letter from W.T.Stead for auction. Stead, who perished when Titanic sank in 1912, appeared to have predicted his own doom in a short story How the Mail Steamer went down in the Atlantic, by a survivor. He was also considered a psychic begging the question why he boarded Titanic. Aldridge hopes the letter will fetch £40,000. No word if a psychic has predicted the final bid on this letter.

1. Associated Press,Recovered Titanic Jewels To Be On Display, 12 Nov 2012
2. Mirror.co.uk, Why Did He Get On Board? Victim Of The Titanic Predicted Doomed Ship’s Fate But Went On Voyage, 12 Nov 2012