1. As reported earlier, a Chinese energy company has announced construction of a full scale Titanic replica. This replica will be permanently docked on the Qi River and will simulate Titanic’s sinking. It is due for completion in 2016, the year that Clive Palmer also plans to have his Titanic replica ready to go. Wuchang Shipbuilding has been contracted to build the Titanic replica but so far Clive Palmer has not signed any formal construction with CSC Jinling. And News.Com.Au reports that industry experts doubt Clive Palmer’s Titanic will ever be built. Maritime historian and cruise critic Reuben Groossens states:

“The shipping world in general all doubts that this will work,” said Mr Groossens. Every corner of the industry I’ve spoken to — the US, UK, France — they all thought exactly the same. People are not that keen at riding in third class, in original conditions as they were. And he’s doing the third class cabins identical to what they were — horrible. He thinks they (passengers) will want to have the experience of the poor folk and will pay huge money. It won’t work on a long-term basis … because there aren’t the passengers.”

As surprising as it sounds, it is likely the Chinese full scale replica will likely be built first. They put up the money, contracts have been signed. And what has Palmer done? Well we have had lots of media buzz, celebrity events, and then it got very quiet. Yes there have been positive signs with lots of preliminary work being undertaken with outfitters, proof of concept trials etc. Yet and most importantly no contract to actually build the ship has been done. Palmer might be having problems negotiating with the Chinese shipyard and some reports indicate reticence on their part in building such a ship. Or it might be it will be built elsewhere.  Then again he might have realized that making money off this ship will be more difficult than first thought.

The novelty of going on Titanic II will appeal to a lot of people,but what is his market? Titanic enthusiasts would certainly be interested but it may be too expensive for a lot of them. And who really, except for perhaps a night, wants to experience how third class/steerage were crammed together having to share toilets? My gut reaction was the market he was targeting is wealthy Asians and Arabs (like in Brunei). How else does one explain why they are building a Titanic themed resort in Tinian? Perhaps Palmer misread the Chinese thinking they would be interested. Perhaps they are but many who have done business in China have run into roadblocks with bureaucracy and with the leaders in Beijing.

Meanwhile Palmer continues to say it will be built. And we move on….
Source: Clive’s Got That Sinking Feeling: Chinese Firm Plans Replica Titanic(29 April 2014, news.com.au)

Hartley New Year Card Sought By Museum
2. Nigel Hampson, curator of the Lancashire Titanic Museum, is trying to raise £5,000 by August to purchase a Happy New Year card signed by Wallace Hartley. The card is already on loan to the museum right now and its owner has indicated he intends to put it up for auction but the museum has first refusal rights on it. Hampson says at auction he could fetch a lot more than £5,000 but that owner wants to keep the card local. Hampson is hoping to find a business willing to sponsor or perhaps a group to fundraise to keep it on public display. The card is currently on display until August.
Source:Titanic Museum In Bid To Buy Card Signed By Colne Bandleader Wallace Hartley(5 May 2014,Lancashire Telegraph)

3. Insurance News Made As Original Titanic Policy Sells For $25,000
Atlantic Mutual was not the only insurer that was helping to cover the risk associated with the Titanic. The remainder was split among an insurance company syndicate which was led by the London based Prudential Insurance Company.
On the page that was just sold in New York, there was an addendum written by hand that pointed out that the policy was “to include the trip from Belfast to Southampton sailing on or after March 30th 1912…and the risk of trials on said trip, if any.” The insurance news making document holds a signature, as well as the date of March 27, 1912.
Source:Insurance News Made As Original Titanic Policy Sells For $25,000(6 May 2014,LIN News)

3. Shipwreck Yields Bonanza of Gold Bars & Coins
Odyssey Marine Exploration Inc., a company that specializes in deep-ocean exploration, retrieved five gold bars and two gold coins — one from 1850 that was minted in Philadelphia, and the other from 1857 that was minted in San Francisco — from the sunken ship known as the SS Central America. The precious artifacts were recovered during a reconnaissance dive to the shipwreck site on April 15. Odyssey Marine Exploration researchers are in the process of documenting the underwater site, and they eventually plan to conduct a full archaeological excavation of the shipwreck, according to company officials.
Source:Shipwreck Yields Bonanza of Gold Bars & Coins(6 May 2014,Discovery News (from Livescience)

The Lancashire Telegraph is reporting that a plaque in honor of Titanic bandmaster Wallace Hartley will be unveiled next year in Colne. Hartley was born and raised in Colne. While there is a plaque near his former home, this one will be installed outside the Spa Theatre. The East Yorkshire Council has agreed to fund the new plaque. The unveiling is tentatively scheduled for 14 April 2014 and it is hoped Hartley relatives will attend. 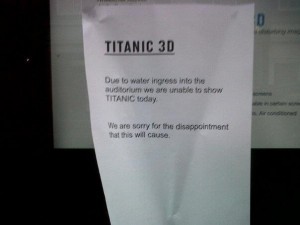 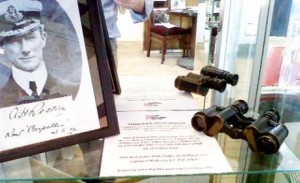