Titanic Exhibition: The Londoner And The Captain Who Were Seized By Fits Of Giggles After The Ship Hit An Iceberg (MyLondon. 13 Nov 2021)

We’re so used to hearing tales of doom and tragedy about the sinking of the Titanic that’s it’s surprising to find a funny story about it. As a major exhibition prepares to open in London next year at an as-yet-undisclosed location to mark the 110th anniversary of the 1912 tragedy, MyLondon is investigating the lives of the Londoners who were aboard the ill-fated ship. In the process, MyLondon came across the rather incredible yet touching story of the 22-year-old signalman who was cracking up in fits of laughter while sending SOS signals from the freezing ship.

Seaman Blamed for Sinking Titanic Was A TRUE Hero: Bravery Medals Of Officer Who Unwittingly Pocketed Key For Binoculars Cabinet Before Disembarking Doomed Ship Are Set To Fetch £15,000 At Auction (Daily Mail, 12 Nov 2021)

He’s infamous as the sailor who was blamed by some for the sinking of the Titanic, but the collection of medals which belonged to David Blair reveal his true heroism. In his haste to disembark, however, he forgot to leave a key which was needed in the crow’s nest to access binoculars and a telescope. As such, Blair is known to history for his unwitting part in the sinking – but the officer had in fact won a series of prestigious medals for his bravery and military service. Roughly a year after the Titanic sank, Aldridge was serving as first officer on the SS Majestic – another White Star ocean liner – when he swam to the rescue of a drowning man who had thrown himself overboard. For his bravery, King George V awarded Blair a Sea Gallantry Medal at Buckingham Palace. He earned further medals during the First World War, when he served with distinction in the navy.

The Titanic Centre in Belfast is one of the island’s most popular attractions. Located next to the Titanic slipways and the former shipyard Drawing Offices, the centre is at the heart of where the Titanic was planned, designed, built and launched. It took Belfast a long time to come to terms with the Titanic’s fate. The Titanic Centre was opened to mark the centenary of the sinking. The long gestation was due to a mixture of shame and embarrassment surrounding the ship’s tragic end. For a long time, the city’s tour guides quipped “she was all right when she left here” but ultimately it was realised that other cities around the world such as Halifax, Nova Scotia and Orlando, Florida were telling a story, through exhibitions, that could really only be told properly in Belfast.

Titanic arrives in Queenstown (now Cobh) Ireland at 11:30 am at Roches Point, the outer anchorage of Queenstown Harbor. Tenders PS Ireland and PS America would transport passengers from the White Star Line pier to the ship. The tenders also picked up mail bags at Deepwater Quay that had been brought in by train. 123 passengers embarked from Queenstown. Of the 123, three were first class, seven second class, and the remaining third class (called steerage back then). One of those disembarking was Francis Brown (later Father Brown, SJ) with his camera and photos of life aboard ship. Titanic departed at 1:30 pm for New York.

Why Titanic’s First Call For Help Wasn’t An SOS Signal (National Geographic, 28 May 20)

But by 1912 when Titanic sailed, there was another, competing distress signal on the scene: “SOS.” There’s a common misnomer that the distress call is short for “Save Our Ship” or “Save Our Souls,” but the letters didn’t stand for anything—it was an adaptation of an existing German radio call. The signal consisted of three dots, three dashes, and another three dots—simple to tap out in Morse code during an emergency and easy to understand, even in poor conditions. An international group including the United Kingdom had ratified SOS as the official international distress signal four years earlier in 1908, but British and Marconi telegraph operators took their time adopting the new signal. (The United States, which resisted early international radio regulation, did not initially sign on to the SOS agreement.)

Cork Historian Teams Up With US Company To Bring Titanic Trail Online (EchoLive.ie, 27 May 20)

Acclaimed historian and lifelong Titanic researcher, Dr Michael Martin is collaborating with American travel experiences company Walks to provide an online tour of Cobh, the Titanic’s last port of call. The Titanic Trail, established in 1998 by Dr Martin is a daily guided walking tour that explores the heritage of Cobh, providing an insight into the maritime, military and social heritage of the town and harbour.  The renowned tour is now going online for a limited time as part of Walks ‘Spotlight Series’ With many walking tours affected as a result of Covid-19, the Spotlight Series brings fascinating tours online, which people can enjoy from the comfort of their own home.

June is the sixth month on both the Gregorian and Julian calendars. June has the summer solstice in the Northern Hemisphere and the winter solstice in the Southern Hemisphere. Traditionally this is on June 21 but that can vary each year.  Ancient Romans thought the period from Mid-March to Mid-June was a bad time to get married. June’s birthstones are the pearl, alexandrite and moonstone. The rose and honeysuckle are June flowers.

Cobh (formerly Queenstown) Ireland was the final stop for Titanic before setting off to New York. Titanic arrived on 11 April at 11:30 a.m and took on 120 passengers. One notable person to depart was Francis Brown (later Father Brown,SJ)whose photographs of the ship on its only sailing would become an important historical artifact.

According to Irish Examiner, the Cork County Council will be inheriting a debt of nearly €97,000($132,000US) from Cobh Town Council.

The money relates largely to commemorative events held in April 2012, plus associated legal expenses, including a €20,000 administration fee charged to the event organisers operating on behalf of Cobh Town council. The deficit will pass to the county council on June 1 after the town council is abolished.

Not small change. Since nearly all the events were free, it meant the city had to come up with the money from its own pockets, donations, investments, and grants (otherwise known as tax money). The company contracted to put on many of the events, Creating Shows Ltd, is owed the €96,790, which was reduced due to grants. One Cobh councillor said the cost was “cheap” in comparison to the international exposure that Cobh got during the Titanic centenary. But the mayor has a different view:

Mayor John Mulvihill said the company “honoured its contract in full” and organised events “very professionally”. However, from a council perspective, he cautioned any future local administration to “be wise” if getting involved with similar undertakings.

Well he is quite right. They rang up quite a bill for this and it took a lot of doing to get it down to what it is now. Cheap is not the word I would use. 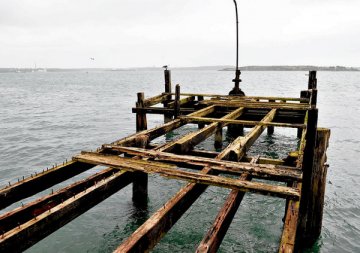 The Irish Examiner reports that the historic pier in Cobh, Ireland, where people boarded Titanic, has been sold to Titanic Experience. Titanic Experience is on the site of the former White Star Line ticket office adjacent to the pier. The pier is in serious disrepair requiring considerable work to make it safe. The Cobh Town Council was disappointed to learn of the news as some desired it be taken over by the city. However confusion over who actually owned the pier was a sticking point for them to proceed. It appears Titanic Experience managed to make a determination and purchase the pier. Some bracing work has begun on the pier.

*Due to a policy of demanding payment for links to Republic of Ireland newspapers, this blog does not provide such links.