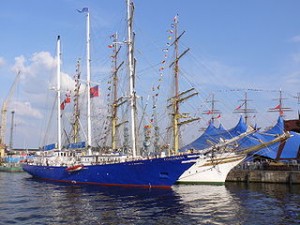 Once again the story of RMS Titanic proves fruitful for the opinion business. Glenn Beck, who hosts both a radio and television program, used Titanic as a metaphor for America on his Fox News show.

“You see, the name of the boat is the America. But America isn’t sinking. Just America as we have run it, is sinking. America, as we have known it, is sinking. But it’s not the ship. Who cares about the White Star Line? We’ll build another one. We’ll build a better one, one that won’t sink or one that will sink slower. We don’t care about the ship. We care about the people in it and the idea of the ship. We need to get people into the lifeboats with the idea of the Constitution, because we can build a fleet of these.”

The transcript details his examination of Titanic leading to his conclusion noted above. Whether you agree or not with Beck, it is at least entertaining. For his efforts, we award Beck the Titanic Cliche of the Day Award.

Plans to sell art for a new Titanic museum in Southampton has been scrapped. Instead the Southampton city council will sell land to finance the new building.

The plan, which the council hoped could raise £5 million ($7.8 million) toward the proposed £15 million ($23.4 million) center, had aroused considerable fury from some residents and institutions in the United Kingdom. Officials at the Tate released statements questioning the intelligence of the move, and protest groups such as Save Our Collection organized to oppose the sale.

John Sinkevics at MLive.com reports readers choose best and worst love songs. Topping the worst list is Captain & Tennile’s 1970 song “Muskrat Love.” I must agree with the selection here. “Muskrat Love” is not going to help anyone feel romantic. Surprisingly Titanic’s “My Heart Will Go On” was number four. I am a bit surprised as this is a good song. I have to wonder whether its constant play is a factor or perhaps people do not like Celine Dion. It has become a signature song for her and fans love it.

I would have liked to see Roy Orbison on the list for “You Got It.”

As for Celine, she is set to return to Vegas in 2011. Obviously the MLive list does bother her one bit. 🙂

Virgin Limited Edition, a U.K. company, recently announced an “underwater plane” that will dive to 36,000 feet. It is a three person submersible and looks pretty cool from the model shown in the picture. It reminds me of the flying submarine from Irwin Allen’s television show Voyage to the Bottom of the Sea. The show was based on the 1961 movie with Walter Pidgeon, Barbara Eden and Peter Lorre. None of the movie actors carried over to the series. Richard Basehart played Admiral Harriman Nelson and David Eddison as Captain Lee Crane. One of the nifty aspects of Seaview was its flying submarine. It could launch underwater, move to the surface and take off. It would do the same in reverse by diving under the water and then returning to its Seaview hangar underwater.

The Necker Nymph alas cannot fly except underwater. From the picture it looks pretty cool. Now for the details. Here is what the press release states (in part):

Available either when chartering Necker Belle, the luxury 105 foot catamaran, or when staying on Necker Island, underwater flight on Necker Nymph takes exploration to another level. Gliding on the water’s surface like an aeroplane on a runway, one of the three pilots will operate the joystick to smoothly dive down, and the thrilling experience begins. Uncover ancient shipwrecks, fly side-by-side with dolphins, or spyhop with whales; the options are endless. With the flexibility to glide peacefully over glorious reefs or bank adventurously in 360 degree turns, the sub is hydrobatic. Individual “wind shields” remove the pressure of slipstream, enabling comfortable speed and ranges previously unthinkable without enclosing the pilots. The open cockpits afford near ideal 360 degree viewing for occupants, creating a uniquely open experience. Dives can last up to two hours.

The press release states that it can be launched from the Necker Belle or from shore. Before you reach for the phone to make a reservation, you ought to know this is no cheap thrill. If you rent the Necker Belle for a week ($88,000 according to one report I read), you get the Necker Nymph for a weekly rate of $25,000. How much it costs just for a day and launched from shore is not listed. My guess is around $10,000-$15,000. Only the heavy wallet brigade can afford it.

Richard Branson once again makes the impossible seem possible. Irwin Allen would agree and, if alive, be one of the first to take a trip.