On 21 November 1916, HMHS Britannic was sunk by mine near the island of Kea in the Aegean Sea. The ship sank in 55 minutes and 1,035 people were rescued, only 30 perished. Britannic was the third and last ship of the Olympic class liners built by White Star Line. The other two were Olympic and Titanic. Britannic was launched in February 1914. Many design changes were made prior to launch due to lessons learned from Titanic. Those changes were:

When World War I broke out, the ship had to be retrofitted as a hospital ship. Most of the furnishings were stored in a warehouse to be placed back aboard after the war. The Britannic began service as a hospital ship on 12 December 1915. She was sent to the Aegean Sea to bring back sick and wounded soldiers. Her first tour of service was ended on 6 June 1916 and she was sent back to Belfast to be refitted back as a passenger liner. As this was underway, the ship was again recalled to military service on 26 August 1916 and was sent back to the Mediterranean Sea.

On the morning of 21 November 1916, the Britannic under the command of Captain Alfred Barnett was steaming into the Kea Channel when at 8:12 am a loud explosion shook the ship. The explosion, unknown at the time whether it was a torpedo or mine, damaged the first four watertight compartments and rapidly filled with water. Water was also flowing into the boiler room. Captain Bartlett ordered the watertight doors closed, sent a distress call, and ordered the lifeboats be prepared. Unfortunately, while they could send messages, damage to the antenna wires meant they could not hear the responses back from ships responding to their SOS.  Britannic was reaching her flooding limit and open portholes (opened by nurses to ventilate wards) were bringing more water in as well.

As the ship was still moving, Bartlett did not order lifeboats be lowered but two lifeboats were lowered anyway. They were sucked into the ships propellor and torn to bits killing everyone in those two lifeboats. Bartlett ordered the ship stopped to assess the damage. The ship was listing so badly that the gantry davits were inoperable. Thinking the sinking had slowed, he ordered the engines back on to try and beach the ship. The flooding increased as more water was coming in aided by the open portholes the nurses had opened to air out their wards early in the morning. Bartlett ordered the engines stopped and to abandon ship. She would sink at 9:07 am, 55 minutes after the explosion. Thankfully the water temperature was high (70 F), they had more lifeboats than Titanic, and rescue came less than two hours. Nearby fisherman were able to help and at 10:00 am, the HMS Scourge arrived and later the HMS Heroic and later the HMS Foxhound.

1,035 survived. Of the 30 lost, only five were buried as their bodies were not recovered. Memorials in Thessaloniki and London honor those lives lost. Survivors were housed on the warships and the nurses and officers were put into hotels. Most survivors were sent home, and some arrived in time for Christmas. Speculation about whether it was a torpedo or a mine was resolved when it was learned that a German submarine (SM U-73) had planted mines in the Kea Channel in October 1916. The loss of two Olympic class ships was a major blow to White Star Line. They would get, as a result of the Treaty of Versailles, the German ocean liner Bismarck (renamed Majestic), which replaced Britannic. They also got Columbus which was named Homeric.

Britannic has been largely forgotten except when news of expeditions were made to the wreck site over the years. The wreck itself was bought by noted author Simon Mills, who has written two books on the ship. An expedition in September 2003 located by sonar mine anchors confirming German records of U-73 that Britannic was sunk by a single mine. The expedition found several watertight doors open making it likely the mine strike was during a watch change on the ship. One notable survivor was Violet Jessop. She had been on Olympic as stewardess when it collided with the HMS Hawke, aboard Titanic in the same capacity when it sank, and then aboard Britannic as a stewardess with the Red Cross.

HMHS Britannic, which sank in 1916 off the Greek coast likely by a mine, could become an underwater diving park. It has been declared a war grave and the Greek government has made it difficult to get permits to dive to it even for legitimate research purposes. That appears to have changed. The Greek economy is not doing well and there is a serious effort underway to make it an historical attraction with museum, hotel, and diving school. Unlike Titanic, there is not likely to be any salvage and would be treated as a historical exhibition you can dive to.
Source: Could the wreck of Titanic’s sister ship help save Greece’s sinking economy? (Daily Telegraph,18 Oct 2016)

1.Memorial plaque to regional editor who died on Titanic vandalised(holdthefrontpage.co.uk,20 Sep 2016)
The plaque in memory of the Northern Echo editor WT Stead has been removed by Darlington Borough Council from outside the town’s library after it was daubed with felt-tip by vandals and is now being cleaned.

2.Just Cool Cars: This 1911 Benz has a Titanic link(USA Today, 17 Sep 2016)
Gerhard and Adrienne Schnuerer of Huntington Beach, Calif., are owners of this one-of-a-kind 1911 Benz, rare because of its German heritage and New York coachwork.The car was ordered by Charles Hayes, a railroad tycoon from Chicago who went down with the Titanic after she struck an iceberg. Part of his legacy becomes the car he left behind — although he never saw it. It was still being built when he died.

3.Keys From Titanic Among Items Auctioned By Jersey Collector(ITV,15 Sep 2016)
A set of keys from the Titanic, which were previously owned by a Jersey collector, has sold for twice the estimate at auction. David Gainsborough Roberts put the set of four up for auction at Christies in London. The keys, which are thought to have belonged to Samuel Ernest Hemming, the lamp trimmer on board the ship, sold for £20,000 yesterday evening.

4. Exploring The Britannic Wreck, Titanic’s Sister Ship (Engineering and Technology, 12 Sep 2016)
To get around this huge wreck in the limited time – only 45 minutes – that the divers have at depth, they use underwater scooters. Even with rigorous safety measures in place, the sea is still unpredictable, especially at these depths. Britannic claimed the life of world-renowned technical diver Carl Spencer in 2013 and Kovacs says that it’s not uncommon to hear the explosions of illegal fishermen nearby.Kovacs’ holy grail for this wreck is a rivet-accurate blended acoustic and optical model of the entire exterior yielding a hugely accurate picture of the bulkheads. What this means in practice is a 3D volumetric model. The acoustic images have been taken with multibeam and side-scan sonar from the Perseo ROV and these will be overlaid with the optical results from the divers.

5.Titanic Floats While Some Sink At Annual United Way Cardboard Boat Race(Mlive.com,9 Sep 2016)
It was a replica of the most famous sinking ship in history. Made with cardboard and deliberately cracked at its center, the vessel defied its design and the notorious fate of its predecessor. It floated. “We can’t even sink the Titanic,” designer and builder Dave Turk said Friday as he loaded the too-successful boat into the back of a pickup truck at the close of the United Way’s cardboard boat race.

HMHS Britannic was the third ship in the Olympic class ocean liner built by White Star Line, and the sister ship of RMS Olympic and RMS Titanic. Due to World War I, she was never used as a transatlantic passenger liner and ended being used as a hospital ship in 1915. On 21 Nov 1916, the ship was sunk likely by an underwater mine off the Greek island of Kea. Of the 1.066 people aboard, 30 lost their lives. Since it sank in shallow waters, the wreck is easily accessible to divers and numerous expeditions have taken place. Although the wreck is in Greek waters, the British have designated it as a war grave and both governments must approve expeditions to the wreck. In 1996 the wreck itself was sold to author Simon Mills whose desire is to leave it as is. 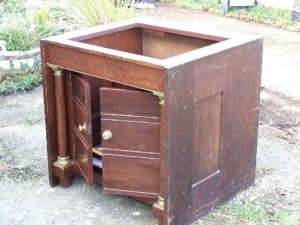