(1)The letter written by Titanic band leader Wallace Hartley to his mother was sold at auction for £93,000 (approx $141,600) reports Agencia EFE . Henry Aldridge & Son conducted the auction. The letter was sold to a private collector.

(2) Colne’s Titanic Museum plans to relocate away has resulted in a petition to keep the museum reports Pendle Today . Nigel Hampson, curator, says that he would prefer to keep the museum in the hometown of Titanic bandmaster Wallace Hartley. However the current place is too small, he notes, and needs better access to those with disabilities. Hampson wants to find a solution and residents have provided suggestions.

(3) Titanic musicians were remembered at Ballarat’s Titanic Musician Memorial. The memorial each year has a memorial band that plays music in its bandstand. Nearer My God To Thee is always performed at the event. 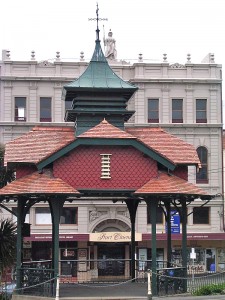 Note: The article implies there is only one memorial to Titanic musicians. There is one in Southampton. The first one was erected in 1913 next to the old library. It was destroyed during WWII by a German bombing raid. The memorial has been rebuilt and dedicated to all musicians who died aboard Titanic. You can read the Wikipedia entry here.

(4) More reaction to Clive Palmer’s Titanic II is reported in Irish Examiner. Opinion is stil divided, writes Hazel Gaynor. Dave Fredericks, descendent of a Titanic survivor, is supporting a petition to block the ship. Michael Molloy of   Addergoole Titanic Society is more open to it. As is Molly Brown descendent Helen Benzinger. While many in Belfast wish it were being built there and not China, the replica will be welcomed.

(5) An appeal for funds to restore the headstone of Titanic chief engineer Joseph Bell is being made. His memorial at Farlam Church in Kirkhouse is deteriorating. Approximately £2,000 is needed. You can view the memorial and make a donation at josephbellengineer.wordpress.com.

(6) The original ledger page of the insurance policy taken out on the Titanic by the Atlantic Mutual Insurance Company will go on the block at Doyle New York, one of the world’s premier auctioneers. Estimated at $30,000-50,000, the insurance policy was written on behalf of the Oceanic Steam Navigation Company Limited, better known as The White Star Line. The auction takes place on 23 April at Doyle New York

Source: Original Ledger For The Insurance Policy On The Titanic To Be Auctioned (17 April 2013, PR Newswire)

(7) Titanic II Update: Deltamarin has been hired to manage the design and construction of Titanic II.